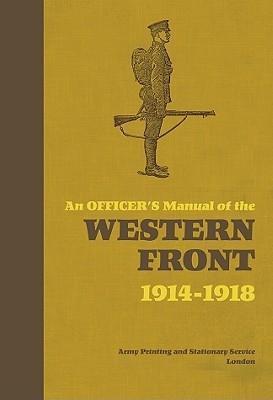 Many people have the idea that the 'Great War' on the Western Front was simple, if ghastly, to fight - with few tactics, and unbroken, monotonous, trench lines as the main feature of the battlefield. In such a scenario soldiers with rifles and bayonets charging each other in blind obedience to stupid repetitious orders are imagined as archetypal of battle. Though undeniably bloody the war was in fact a ferment of new ideas and new weapons. Gas, flame throwers, super-heavy artillery, concrete bunkers, tanks, aircraft and other innovations were all introduced, whilst older notions such as barbed wire, machine guns and armour took on a new lease of life.Interestingly all these developments of war - and the social and survival aspects of the soldier's life - were all documented in huge detail in contemporary publications, instructions and manuals. Arguably these stemmed from the pre war tradition that had produced 'Infantry Training' and 'Musketry Regulations' by 1914, but after the outbreak of war collecting data and printing new instructions accelerated until almost every day brought some new publication.Everything was covered - from Lewis guns, to pigeons, trench foot, and what to do with prisoners. A whole 'Army Printing and Stationery Service' was indeed devoted to producing these new pamphlets, which between them tell the story of what a soldier was supposed to do in virtually any circumstance. Some, such as those dealing with military law and the treatment of the dead are chilling - others, like the use of 'Strombos Horns' are now quaintly comic. 'Private' publications, both by officers, and by patriotic civilians, boosted the range of this material even further.The "Officers Manual" will be a compendium of 20 - 30 whole manuals and shorter selected extracts, together with illustrations. These cover the trench experience from 1914 right through to the end of the war, giving not only a popular nostalgic view of the 'war to end wars' - but a rounded picture of how it was, and how it was supposed to be, on the Western Front in World War I. The selections are linked by an introduction explaining how these publications came about, and how they fit into the bigger picture of the conflict.It follows the hugely successful "The Seaman's Pocket-Book" and "The Royal Navy Officer's Pocket-Book". It has widespread appeal due to continued interest in the trench warfare of wwi. It is published in advance of the 90th anniversary of the Nov 1918 Armistice. It has evocative leatherette and cloth jacket treatment.