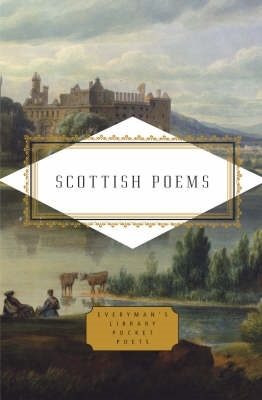 Scotland, like so many other nations, has produced poetry that is patriotic, that paints landscapes, people and situations, that speaks to personal matters, and those equally everyday matters pertaining to the mind and to the spirit. The Christian heritage of Scotland has long been played out in verse, through Celtic devotional works, Catholic works, Protestant works, and not forgetting satires on the Puritanism in Scotland's post-Reformation identity. Language and culture have been equally multifarious in the nation so that three major languages: Scots, English and Gaelic (examples of which are translated in this anthology) compete and co-exist in poetry. The fifteenth century poet, William Dunbar, joked that there was no music in hell except for the bagpipes, and there speaks something of the historic lowland attitude to the Gaidhealtachd (Gaelic speaking Scotland, principally the highlands). Hostility and eventual harmony is a marker of the Scottish highlands/lowlands divide as much as for that between Scotland and England.Historic tension is not to be dismissed but, certainly, the poetic palette of Scotland is one of multilingual richness, and shows an enduringly high quality whatever the cultural vicissitudes that play a part. The medieval Makars, most prominently Robert Henryson, William Dunbar and Gavin Douglas, are often taken to represent a golden age when poetry in Scots ran the full range of mood, mode and subject matter. If this has, perhaps, never been bettered, the sixteenth century lyrics and sonnets of Alexander Montgomerie, Alexander Scott and other poets around the court of James VI, and the eighteenth century vernacular 'revival' of Allan Ramsay, Alexander Ross, Robert Fergusson and Robert Burns represent at points equally brilliant periods; and the twentieth century 'modern renaissance' of Hugh MacDiarmid, Violet Jacob and William Souter proved that Scots remained a viable poetic currency, as a living poet such as Tom Leonard continues to demonstrate. Poetry in Gaelic too has its tradition of peaks where the flame seems to burn more visibly at certain times than others.Alexander Macdonald (Alasdair Mac Mhaghstir Alasdair), Rob Donn (Rob Donn MacAoidh) and Duncan MacIntyre (Donnchadh B!n Mac an t-Saoir) make the eighteenth century a high point in achievement, while Sorley Maclean, George Campbell Hay and Iain Crichton Smith do similarly for the twentieth century: the latter three, arguably, making Gaelic verse the most able variety in Scotland during the last sixty years. Historically as many successes are scored in Scottish poetry in English. James Thomson, author of The Seasons, joins James Macpherson translator/creator of the poetry of 'Ossian' in promulgating works that are seminally iconic and influential right across the artistic genres, painting and music as much as literature, in western culture. The romantic, patriotic poetic image of Scotland is sounded in English as much as in any other language, as the writing of Walter Scott or Lady Nairne attests. James (B.V.) Thomson, John Davidson, Edwin Muir, Norman MacCaig, W.S.Graham, Edwin Morgan, Liz Lochhead, Kathleen Jamie and Don Paterson are all deeply Scottish poets speaking through the nineteenth and twentieth centuries to the worldwide audience that exists for creative utterance that both emanates from but is never limited by the particularity of place. Scotland's story is one that is never certain, but, enduringly and importantly its poetry is.