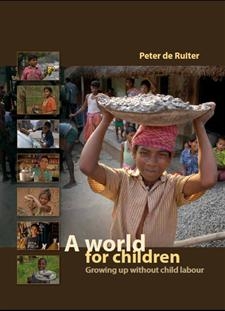 In A world for children, author and photographer Peter de Ruiter, touches a raw nerve. During his travels in nine countries across three continents he began to understand the reality of child labour, how it originates and why. He made notes of the fallacies created to justify why children should work. He photographed the injustice the children are subjected to. And he offers solutions! The reader is given different ideas on how to personally take action against child labour.
Children must go to school. They must play and learn and be allowed to develop their full potential. It is up to adults to create a world in which children can do exactly that: a world for children. Child labour is not a natural phenomenon. It was created by man and can be ended by man.

This book is targeted towards a broad audience: consumers, employees of aid organisations, politicians, children from the age of about ten, anyone who feels touched by the subject.
The more than 400 exceptional photos and the critical text spread just one message: stop child labour now!
More information on this book can be found on www.aworldforchildren.net

Author
Dutch travel photographer and author Peter de Ruiter (1960) spent many years travelling around the world. On his travels he was regularly confronted by children begging or working. To write this book he went in search for what was behind this distressing phenomenon. His degrees in sociology and mass communication helped him understand and publicize the subject.