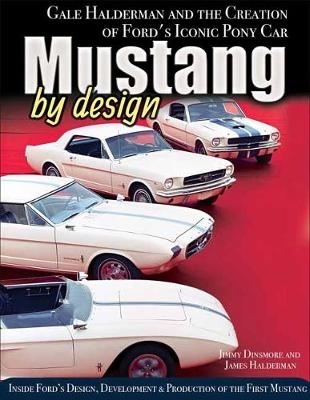 Award-winning designer and stylist Gale Halderman was at the epicenter of the new project, and, in fact, his initial design sketch formed the basis of the new Mustang. In this behind-the-scenes tome, his involvement in the project as well as telling the entire story of the design and development of the Mustang is revealed.

The process of taking a car from sketch to clay model to prototype to preproduction and finally finished model is recounted in insightful detail. During the early 1960s, many fascinating experimental cars were created in the lead-up to the launch, such as the Mustang I two-seater, Mustang II proto-type, Mustang Allegro, and Shorty. Eventually the Mustang, based on the existing Ford Falcon, received the nod for final production. In a gala event at the World`s Fair in New York, the Mustang was unveiled, receiving public accolades and critical acclaim, and soon it became a runaway hit. After the initial success, Ford designers and Gale Halderman designed and developed the first fastback Mustangs to complement the coupes. The classic Mustang muscle cars to follow, including the GT, Mach 1, and others, are profiled as well.

The Mustang changed automotive history and ushered in the pony car era as a nimble, powerful, and elegantly styled sports coupe. But it could so easily have stumbled and wound up on the scrap pile of failed new projects. This is the fascinating and dramatic story of how the Mustang came to life, the demanding design and development process, and, ultimately, the triumph of the iconic American car.