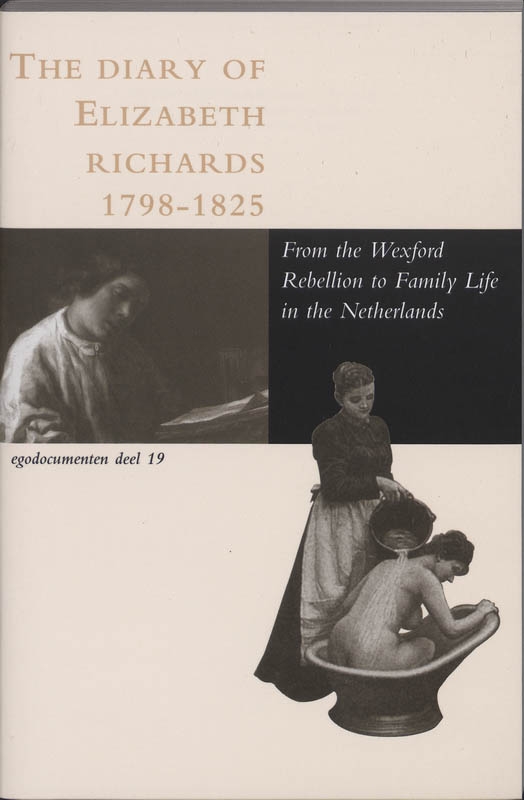 The diary of Elizabeth Richards (1798-1825).
From the Wexford Rebellion in Ireland to Family Life in the Netherlands
Edited by Marie de Jong-IJsselstein, with an Introduction on the Wexford
Rebellion (1798) by Kevin Whelan
Egodocumenten 19
€ 19.00
Levertijd: 5 tot 7 werkdagen

The diary that Elizabeth Richards kept between 1798 and 1825 is extraordinary in a number of ways. In the first place, it is one of the relatively few diaries by women in this period. Secondly, it is partly Irish and partly Dutch, and therefore sheds light on the relationship between the two cultures. In the third place, its contents are exceptional: through Elizabeth's eyes, the reader witnesses the great rebellion in Ireland in 1798, Elizabeth's relationship with her Dutch husband Count Frederick Willem van Limburg Stirum, the development of her ten children, her financial worries, illness within her family, and social life.

Elizabeth treated her diary as a confidant to which she could entrust her deepest feelings. This diary is thus an excellent example of an early nineteenth-century journal intime.

De pers:
' Elizabeth Richards is a fascinating diary, spanning a quarter of a century, from its abrupt beginning in the middle of the Wexford rebllion, to its unexpected conclusion in Holland. Details of the Wexform portion of the narrative are perhaps well known, but presented now with a thourough apparatus it will illuminate many aspects of Ireland's year of Liberty. As female diary it is extremely significant, but given the place of the Richards family amongst the Protestand Liberals of County Wexford, the author's observations and fears are invaluable.[?]

While commentators may dispute the originality of the Wexford portion of the narrative, since several accounts appear to have been rewritten, the diary remains a fascinating account of domestic concerns. It is a rich commentary on contemporary medicine, of blood-letting and leeches, of frightening cures for 'water on the brain'. It is an invaluable mine, not only for women's studies, but also for the history of childhood. Dr. de Jong is to be congratulated for making it available.'
- Daire Keogh, St. Patrick's College, Drumcondra, in: Irish Economic an Social History 27, 2000