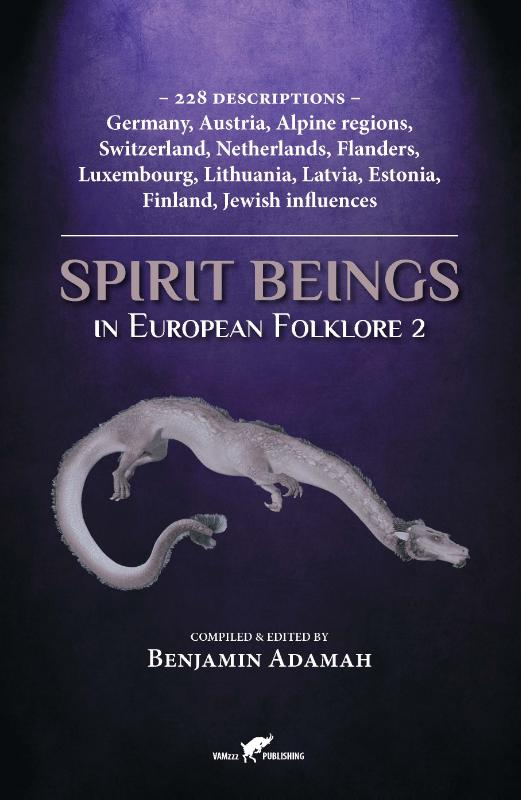 Compendium 2 of the Spirit Beings in European Folklore-series covers the German-speaking parts of Central Europe, the Low Countries, the Baltic region and Finland. Via the Ashkenazi Jews, spirit beings from the Middle East entered Central European culture, which are also included. This originally densely forested part of the continent is particularly rich in nature-spirits and has a wide variety of beings that dwell in forests and mountainous areas (Berggeister) or act as atmospheric forces. Also dominant are the many field-spirits and variations of Alp-like creatures (Mare, Nightmare). There is an overlap with the Nordic and Eastern European Revenant and Vampire-types, and we find several water- and sea-spirits. Among the German-speaking and Baltic peoples, invoking field-spirits was an integrated part of agriculture, with rites continuing into the early 20th century. The Alpine regions have spirits who watch over cattle. In general, forest-spirits are prominent. Germany has its Moosweiblein and Wilder Mann (Woodwose), the Baltic region has its Mātes, and Finland its Metsän Väki. Then there are ghostly animals, and earth- and house-spirits such as the many kinds of Kobolds, the Dutch Kabouter, and the Kaukas of Prussia and Latvia.

Compendium 2 discusses 228 spirit beings in detail, including their alternative names, with additional references to related or subordinate beings and a unique selection of illustrations.