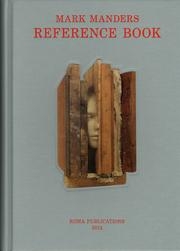 Dutch artist Mark Manders - who will represent the Netherlands at the 55th Venice Biennale in 2012 - was awarded the Heineken Prize for Art 2012. The jury praised him "for his ability to create a personal world with a distinct visual language that both intrigues and becomes fixed in the memory." On the occasion of this award, Roma Publications compiled this almost encyclopedic book which covers Manders` entire oeuvre from the late 1980s until the present. It contains facsimiles of the artist`s publications and a focus on a large number of recent, never-published works.